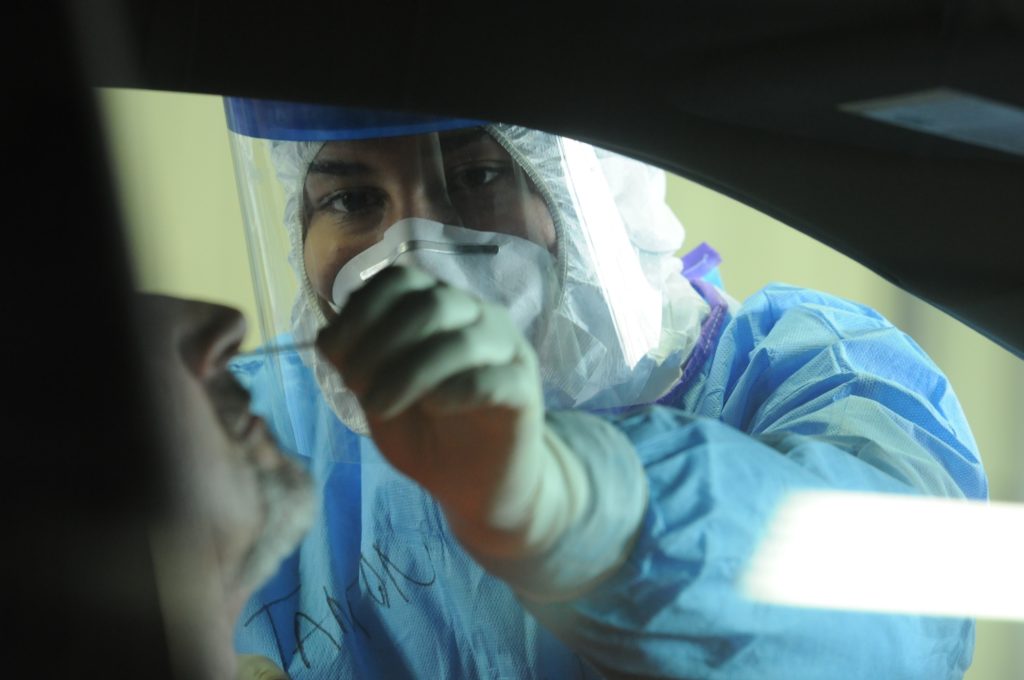 Akira Tanton (AHS Class of 2023) spent most of her spring and summer helping thousands of Chicagoans get tested for COVID-19.

Tanton, airman first class in the 182nd Airlift Wing of the Illinois Air National Guard, was one of about 50 in her medical support unit who volunteered to conduct coronavirus testing at 11 drive-in sites throughout Illinois.

“The uncertainty of it is challenging. This is something we’ve never seen before,” she says. “But we all decided to answer the call.”

Tanton reported for duty March 16 with one day’s notice. Her mission ended July 31 when the National Guard turned over operation of the test sites to civilian contractors.

Tanton completed her spring semester assignments, then her finals, online at night alone in her hotel room.

“School has been hard, but my professors have been accommodating,” she says.

She and her team members shared their meals in a hotel conference room, seated apart for physical distancing. Their vital signs were checked three times a day.

They were transported to the testing site in early morning and stayed until closing mid-afternoon, or when all tests allocated for that day were given. Tanton was stationed at testing sites in Harwood Heights, then Markham and finally, South Holland.

The Guard conducted the tests according to guidelines from the state Department of Public Health and Emergency Management Agency. Just as protocols for dealing with the virus have changed, so did testing procedures.

In the first weeks, tests were available only to first responders, health care providers and older adults, with 250 tests each day. By late April, anyone with COVID-19 symptoms was eligible for testing and 750 tests per day were available. As of mid-May, the Guard had administered more than 96,000 coronavirus tests statewide.

Initially, tests were done by inserting a six-inch swab deep into the nasal cavity. That meant Air Guard medics wore hazmat suits and surgical gowns over their uniforms, as well as gloves, masks and face shields.

Later, most tests used shorter swabs that people insert themselves, put in a vial and hand back to the medics, cutting down on the required PPE.

“They are nervous and scared,” Tanton says of those who came for testing. “Some people cry. We take the time to explain it and tell them it will be helpful in the long run. When they’re done, they say, ‘That wasn’t as bad as I thought.’”

Tanton joined the Air Guard in 2017 to help pay for college and because “I always wanted to do something bigger for myself and to serve others.”

Her unit is headquartered at Peoria Air National Guard Base. As an aerospace medical technician, she’s a certified EMT who spends one weekend a month and two weeks a year training as a medic in hospitals or in the field.

Tanton plans a career in the health professions, although she’s not yet certain which field. Last year she went on a MedLife student medical mission to Peru, which inspired her to consider practicing in an underserved country.

When she was called up in March, she didn’t know how long her Guard assignment would extend but, “however long they need us is how long I plan to stay.”

As weeks turned to months, she checked in often with her family in Sterling and Rock Falls, encouraging them to wear masks.

“It could happen to anyone,” she says of COVID-19, adding that some of her friends were asymptomatic but tested positive for the virus.

The reward for her service during the pandemic? “Knowing I’m making an impact,” she says.