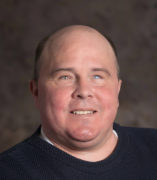 Peter Berg has been coordinating and providing technical assistance as well as conducting training on various aspects of the ADA since he joined the Great Lakes Center in October of 2000. He is a graduate of North Central College in Naperville, IL with a bachelor’s degree in History. Prior to joining the Center he spent seven years with Dominick’s Finer Foods, the last two years as a Customer Service Manager.

Peter currently serves on the Board of Directors for Achieving Independence and Mobility Center for Independent Living and is the former Chair of the Mayor’s Advisory Commission on Disability for the city of Naperville where he resides. In addition, he currently serves as a member of the Illinois Attorney General’s Office Illinois Accessibility Code Task Force.

UIC Chancellor’s Committee on the Status of Persons with Disabilities, Former Chair

2010 - Award of Merit, UIC Office of the Vice Chancellor for Academic Affairs and Provost