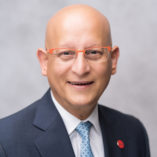 Dr. Carlos Crespo's main area of research involves the epidemiology of physical activity in the prevention of chronic diseases, and research on minority health issues. He lists more than 100 publications and has been a contributing author to five textbooks on minority health and sports medicine, and more than 30 government reports, including the Surgeon General’s Report on Physical Activity and Health. He received the 1997 U.S. Secretary of Health Award for Distinguished Service as part of the Salud para su Corazon campaign, and in 2003 became a Health Disparities and Minority Health Scholar from the National Institute of Minority Health and Health Disparities at NIH. He has served in the Board of Trustees for the American College of Sports Medicine, Oregon Health Policy Board, and the Executive Leadership Team of the NIH Diversity Program Consortium. He currently serves in a CDC Advisory Committee for the Community Guide for Physical Activity, and the Physical Activity Alliance Diversity Equity and Inclusion Committee. He is a Fellow of the American College of Sports Medicine and a member of the Editorial Board of the Journal Cities and Health.

“Exercise/Physical Activity in Individuals with Type 2 Diabetes: A Consensus Statement from the American College of Sports Medicine”,

“New research directions on disparities in obesity and type 2 diabetes”,

“Race/ethnicity, social class and their relation to physical inactivity during leisure time: results from the Third National Health and Nutrition Examination Survey, 1988-1994”,

Dr. Crespo has served as an advisor for the World Health Organization, the Pan American Health Organization in areas of Healthy Eating, Active Living, Aging in Place, Urban Health and Sustainability, and Health and Housing. He was a member of the National Advisory Council for the Active Living Research Initiative of the Robert Wood Johnson Foundation. He is also as an advisor for NIH and CDC.

American College of Sports Medicine, Board of Trustees

1997 - US Secretary of Health Distinguished Service Award, US Department of Health and Human Services