Getting to Know Wolf 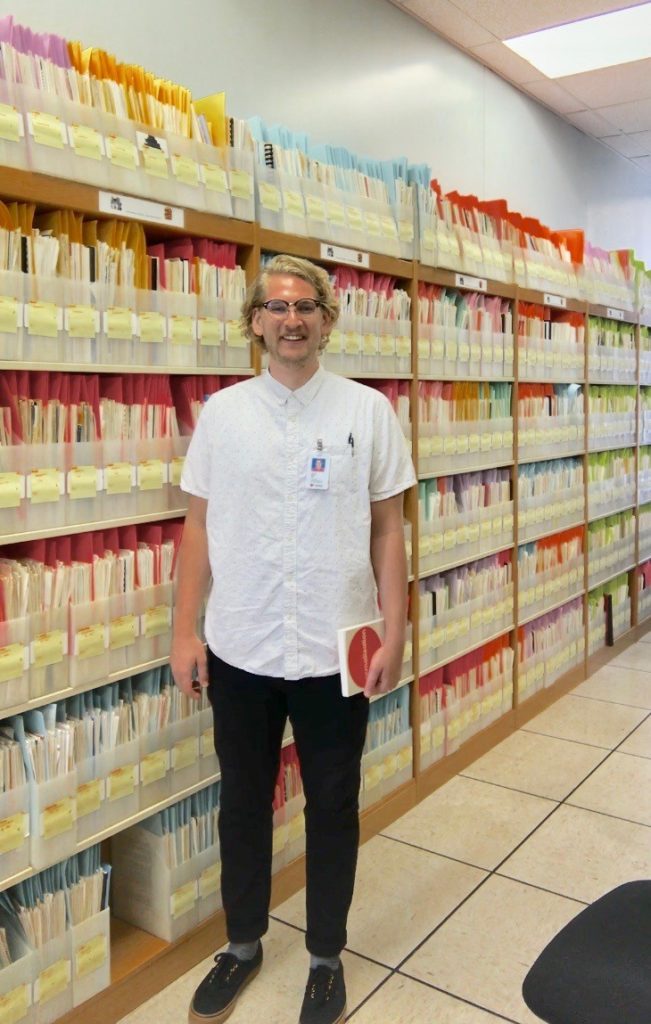 Before I get started I should briefly introduce myself. My name is Drew Egli and I am going into my second year of the Disability Studies PhD program at the University of Illinois at Chicago (UIC). I am interested in predictors of self-determination and how to foster the development of self-determination in young adults with intellectual and developmental disabilities. The PhD program at UIC views disability not as a defect within a person, but as how the person and their environment interact and how social and political barriers create disabilities. This train of thought is similar to that of Wolf Wolfensberger. When I was first approached about the possibility of visiting the Wolf Wolfensberger archives I knew I had to jump on the opportunity. Throughout my academic career, I have encountered the unique name (Wolf Wolfensberger) in class readings, discussions, and at conferences. Prior to my visit, my understanding of Wolfensberger is that his work was some of the most influential in leading up to the deinstitutionalization movement. While his influence during this movement is what he is most well-known for, there is a lot I didn’t know about Wolf Wolfensberger.

As I explored the seemingly endless stacks of books, articles, overhead slides, documentaries, notes, manuals, reports, artifacts, and unpublished papers – I began to gain a more complete picture of Wolf. It is an understatement to say that Wolf was well read. His personal book collection is strewn across multiple book shelves. The majority of the books contain a citation and notes typed up by Wolf. He would often ask himself questions or leave a blunt opinion regarding the content. In the documentary Valuing Lives, Wolf was painted as an unpleasable professor, a workaholic, and later in his career, a controversial “crackpot” – due to his work on the concept of deathmaking.  Yet, through his notes and belongings in the collection – I discovered a lesser known side of Wolf.

I stumbled upon some Ebony magazine clippings from 1958 where Wolf was featured for helping a newly enrolled African American student with her college studies. Another interesting find in the archives was the amount of books and articles Wolf had surrounding Euthanasia programs during Nazi Germany. While looking through his personal collection of books I noticed a surprising amount of books surrounding comedy, jokes, and jesters. Wolf’s notes in these books point out how differences from the norm were often the punchline. Through these somewhat random finds I began to see a theme emerge – expense, or in terms Wolf would use value. His passion for empowering, or in enriching the lives of individuals who were devalued by their environment expands beyond people with disability. Its apparent he had a knack for noticing inequalities and taking action against those barriers. I believe these are the convictions that made Wolf appear to be an ”unpleasable professor or workaholic.” He realized that there was a lot of devalued people in the world and this fueled his research and his need to aid in the change.

My time in the archives has helped spark new thoughts surrounding my own interests and how they overlap or are inspired by Wolf’s. If Wolf was still alive today I would first thank him for his influence on not just people with disabilities, but also for the potential of his influence on other marginalized groups. I would also ask him about the importance of a Pope Action Figure he has in his collection.