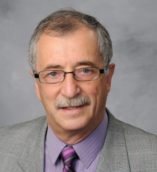 Alexander S. Aruin received his PhD in medical cybernetics from the Moscow Institute of Artificial Organs and Transplantation in 1978 and a DSc (PhD) in biomechanics from the Latvian Institute of Traumatic Injuries and Orthopedics in 1990. He was affiliated with the Moscow Institute of Electronic Engineering as full professor and director of the Laboratory of Ergonomics and Biomechanics. After moving to the United States in 1992, he became a faculty at Rush-Presbyterian St. Luke’s Medical Center in Chicago and later a faculty member at Pennsylvania State University. He is currently a professor of physical therapy, bioengineering, and the director of the Knecht Movement Science Laboratory at the University of Illinois at Chicago, and a professor of physical medicine and rehabilitation at Rush University, Chicago.

“A textured insole improves gait symmetry in individuals with stroke”, Dissability and Rehabilitation

“Improvement of postural control in individuals with multiple sclerosis after a single-session of ball throwing exercise”, Multiple Sclerosis and Related Disorders

2014 - Professor of the Year, UIC College of Applied Health Sciences