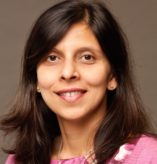 Dr. Bhatt received her BS in Physical Therapy from University of Mumbai in 1997 and her Master’s Degree in Rehabilitation Sciences from the University of Manitoba in 2000. She began her doctoral work at the University of Illinois at Chicago in 2001 and received her Ph.D. in Movement Sciences/Motor Control in 2006. Dr. Bhatt has also continued her Physical Therapy practice and is a registry staff member at Marianjoy Rehabilitation Hospital. Dr. Bhatt’s research expertise is in field of adaptive perturbation training for fall prevention. Her research involves investigating neuromechanical basis of balance recovery from external perturbations such as slips and trips and subsequently designing intervention paradigms for reducing fall-risk in healthy and pathological populations. Her research interest and focus also lays in examining effects of alternative cognitive and motor therapies for improving impairment, function and participation in community-dwelling people with neurological disorders with an emphasis on stroke survivors. Dr. Bhatt has nearly 50 peer-reviewed publications and has been extramurally funded since 2011 by agencies such as American Heart foundation and NIH.

City of Naperville, Board member on the Advisory Commission on Disabilities

Journal of Physical Therapy and Health Promotion, Editorial Board Member

2017 - Researcher of the Year Award (Clinical Sciences), University of Illinois at Chicago