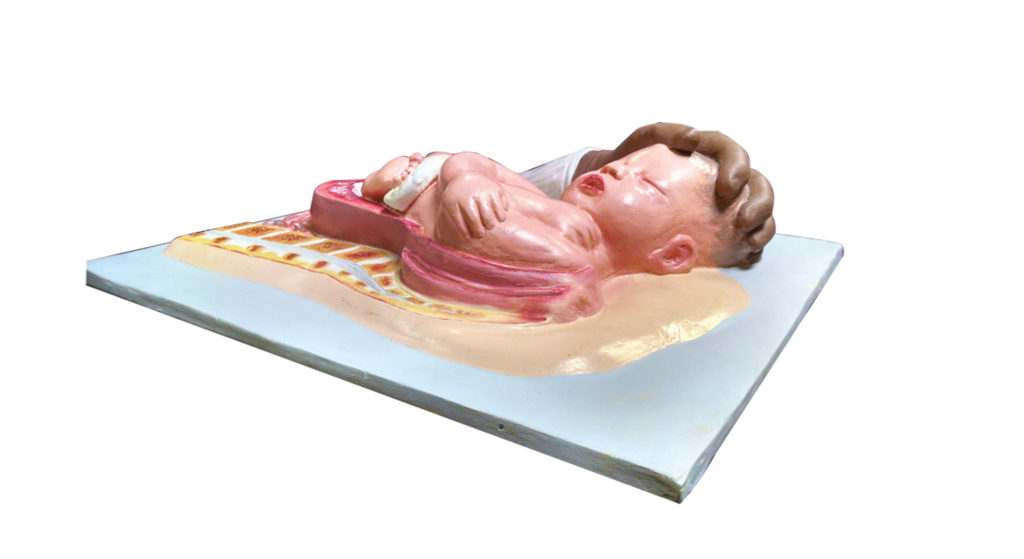 Earlier this year, a very large delivery arrived at the College of Applied Health Sciences. The carefully packed boxes contained more than two dozen medical sculptures and illustrations— approximately 450 pounds worth of material. Known as the Charlotte Holt Collection, it’s a gift to the Department of Biomedical and Health Information Sciences from the Association of Medical Illustrators.

Charlotte Sinclair Holt ’37 BVIS was an esteemed biomedical artist who spent much of her 40-year career collaborating with the late Frederick Falls, head of the Department of Obstetrics and Gynecology in the UIC College of Medicine. Between 1937 and 1970, Holt and Falls created 36 major medical exhibitions for physicians and surgeons.

“Charlotte Holt is thought of as a pioneer for her 3D work,” says John Daugherty, director of the Program in Biomedical Visualization.

“She was one of the first to work with plastic carvings, which was evidently pretty groundbreaking at the time. And it’s quite remarkable that this technique was developed here at UIC.

Now, current and future students in the BVIS program will benefit from this generous in-kind gift.

A native of Massachusetts, Holt was born in 1914 but spent the majority of her life in Illinois. She studied medical illustration at UIC under Tom Jones, the founder of the program that evolved into BVIS. After graduating in 1937, Holt stayed on as an instructor until 1955.

Holt was not only passionate about her profession but also very talented, racking up over 70 awards and medals for her accomplishments. As a freelance medical illustrator, she produced original pieces for advertising agencies, physicians and major pharmaceutical companies.

In 1950, the Museum of Science and Industry in Chicago displayed one of Holt’s sculptures in an exhibition called “The Miracle of Growth.” Holt’s contribution was a transparent sculpture of a pregnant woman.

While that piece isn’t part of the Charlotte Holt Collection, the collection includes many other sculptures related to pregnancy and reproduction. Holt’s longtime collaboration with Falls resulted in stunning sculptural renditions of cesarean sections, ectopic pregnancy, forceps births and basic principles of human reproduction.

In addition to the dozens of exhibitions they put together for state and national medical meetings, Holt and Falls spent 25 years working on the “Atlas of Obstetric Complications,” which was published in 1962. 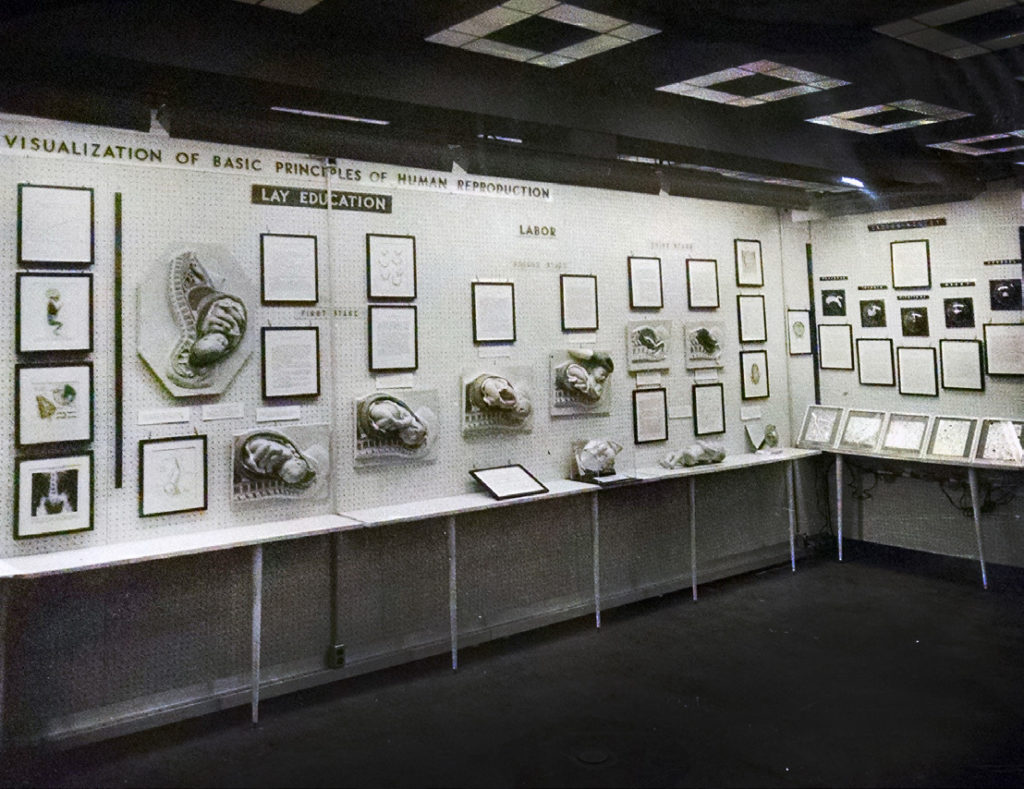 Holt was a charter member of the AMI, still the preeminent organization for biomedical visualization artists. She was president from 1970-71 and held a variety of other roles in the organization over the years, including vice president, member of the board of governors, committee chair, newsletter editor and correspondence secretary.

Throughout her life, Holt cultivated connections with medical illustrators around the world. “It’s said that she received stacks of mail every day at her home in River Forest,” Daugherty says. At AMI events, she could often be found on the dance floor; she was a gregarious woman but serious and focused when it came to her work.

When Holt died in 1990, her brother, Lawrence, placed a memorial stone on her grave with a succinct but fitting phrase: “Art Was Her Life.”

Learning from the past

The biomedical visualization profession has come a long way since Holt’s time. “The techniques that were used back then, as far as sculpting and finished illustration techniques, are no longer used,” Daugherty says. “We have newer technologies like digital illustration, 3D digital sculpture, animation and virtual reality.”

But that doesn’t mean the Charlotte Holt Collection won’t be educational or valuable for BVIS students. Today’s techniques evolved directly from the techniques of the past. Students are often quite interested in that history. Daugherty notes that students sometimes ask to see demonstrations of old-fashioned approaches, like using carbon dust to build tone or using watercolor wash instead of color.

BVIS students also have a keen appreciation for good drawing skills, no matter the era from which they date.

“Our students are still expected to put pencil to paper,” Daugherty says. “They admire the skills of fellow draftspersons.”

There is one other significant educational component—a thread that runs through every BVIS course.

“It’s important for students to understand that there are various approaches to visualization and visual communication,” Daugherty says. “There’s a lot of information to be gleaned from the collection. It’s not necessarily only about technique. It’s also about how Holt thought and conceived to tell a visual story.” 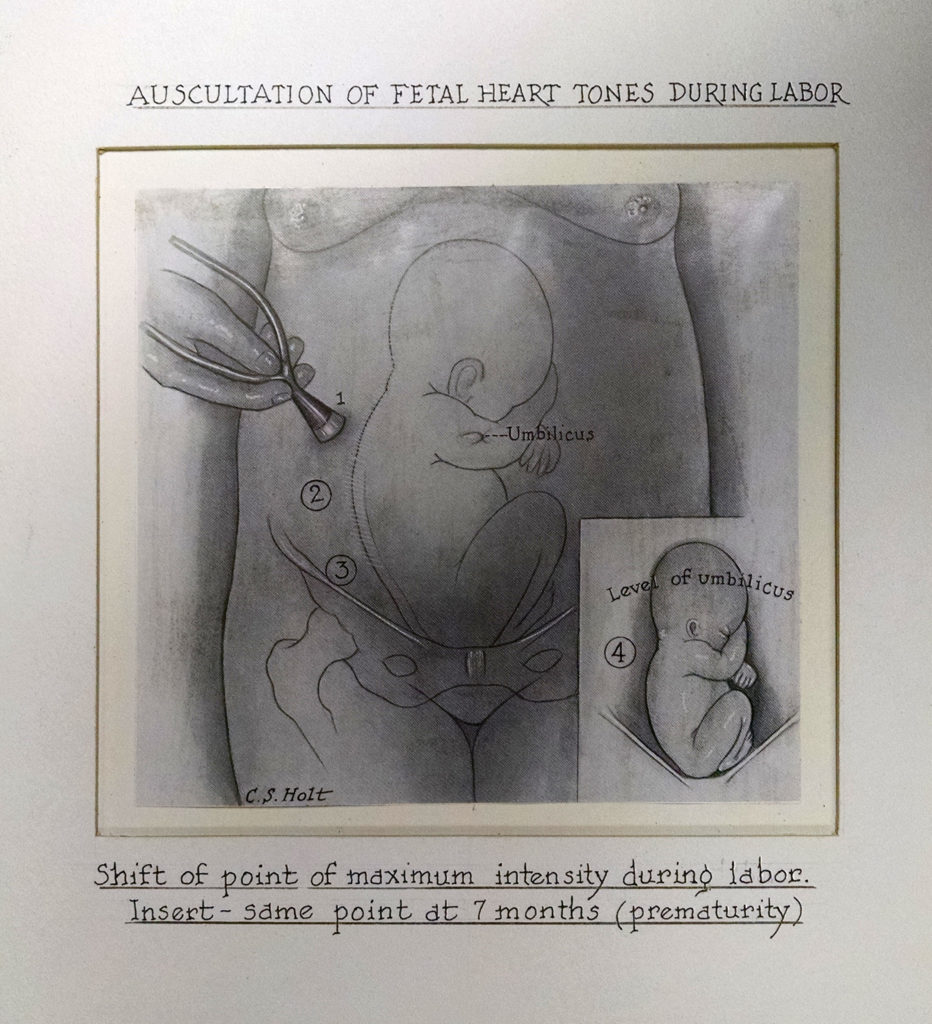 The department plans to scan and digitize the entire collection before the 100-year BVIS anniversary celebration in October. Members of the general public will be able to visit the BVIS website to view the collection online. Daugherty also hopes to display some of Holt’s illustrations in the department hallway dedicated to Jones.

The special gift of in-kind donations

In-kind gifts like the Charlotte Holt Collection serve a critical purpose at AHS. They provide students and faculty with opportunities to learn from valuable, sometimes one of- a-kind, resources and materials. Alumni and friends of UIC who might not have the financial ability to make a cash gift can still support the university in meaningful ways through in-kind gifts.

“When donors have items that directly relate to our mission, they are able to make a gift of a significant magnitude even when they perhaps do not possess the financial or cash means to do so,” says Keenan Cutsforth, assistant dean of advancement. “In-kind gifts open additional doors for donors to embrace philanthropy and support institutions like AHS.”

BVIS students and faculty have benefited from a variety of in-kind gifts in recent years. The department has been the recipient of medical atlases and textbooks, personal libraries, anatomical models, a 60-inch interactive touchscreen display and collections of medical illustrations and related artwork.

In-kind gifts are a great way to show pride for your affiliation with BVIS while supporting generations of graduates,” Daugherty says. “Your gift will be treasured for years to come.

Daugherty is eager to see how students, alumni and the general public react to and learn from the Charlotte Holt Collection. As an educational resource with a special connection to UIC, it’s a donation that is especially meaningful.

“We’re deeply appreciative of this gift from the AMI,” Daugherty says. “In many ways, it feels like the work is returning back home to the place where it was conceived and born—pun intended.”